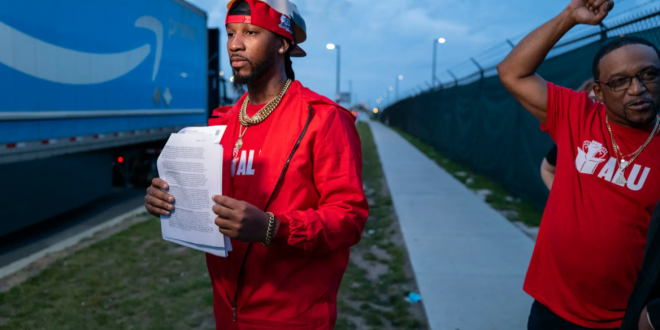 Last week, there was a presentation on the strike of Amazon employees in Germany, and following that topic, I have read an article on Amazon Staten Island workers’ withdrawal request for union vote election because Amazon rejected their signage was inadequate to reach the threshold required.
Mr. Smalls, one of the main figures in this movement, says that this effort has been organized not by an established union but instead by a group of current and former Amazon workers aiming to form an independent organization, the Amazon Labor union, focused solely on the Nation’s second-largest employer. ( Weise,2021) The group spent six months collecting signatures from workers requesting a vote and submitted those signatures to the labor board last month.
The organizers were confident about their signage which was filed to represent 5,500 workers(Weise,2021). However, Amazon said in a document that the warehouses are hiring about 9000 people, so it does not meet the required number. Here, there is a discrepancy in the number of employees that the actual workers recognize and the number of Amazon boards recognize.
I think this is a situation we can not overlook, and Amazon’s Anti labor union attitude is harsh. An election at an Amazon warehouse in Alabama early this year, supported by the national retailer’s worker union, was unsuccessful as well because of Amazon’s anti-union measures.
After reading this news, I was surprised to know how strict Amazon’s anti-labor union attitude was, and my point is not necessarily on the fact that the labor union failed but is on the fact that Amazon even failed to grasp the correct number of employees.
In the last lectures, we touched on consumer protection and the accountability of the companies to consumers. When it comes to food or clothes, consumers demand companies to declare the process involved in the production. It is taken for granted that food producers need to be able to clarify who they are and what is done inside their factories. To give a bit extreme example, some people avoid meat after they see the cruel treatments to the animal on farms. For another example, in the fashion industry, we had a social movement of #whomademyclothes after the Lana plaza incident in Bangladesh, which revealed many illegal child laborers and cruel working conditions in the fashion Industry.
Then, how about companies like Amazon? Does Amazon owe accountability to consumers on how their work is processed in amazon and the workers involved in any process?

What to Look for in a Document Management System

Document management is mostly a practice that enables companies to organize and observe after their ...