In the United States, “about 350,000 deaths annually are attributed to long-term exposure to fossil fuel-related fine particulate matter”. While these statistics were collected from a national survey in 2012, it is expected that recent studies will reveal significant increases in these percentages (Milman, 2021). At the time of the study, states such as Massachusetts and California attributed upwards of 15% of annual deaths to particulate matter, while states such as Pennsylvania, Ohio, Michigan, Indiana, and Illinois attribute upwards of 20% of annual deaths to fossil-fuel related fine particulate matter. To put this in perspective, heart disease is by far the leading cause of death in the United States and has been since the beginning of the 21st century (CDC, 2021). Following this, lung disease and lung cancer have accounted for more than 130,000 American deaths in the past year (American Cancer Society, 2021). Fine particulate matter released from burning fossil fuels has been known to get into the lungs and cause severe short and long-term damage to respiratory systems.

It is not news to us that the oil industry is polluting the planet. What is news, is that leaders in this industry were aware of these detrimental effects at least 50 years ago. A mass of historical documents from as early as the 1960s from corporate archives at libraries in the United States and Canada, scientific journals, and paperwork reveals legal cases that show the oil industry beginning to grasp the damage to human and animal health caused by the burning of fossil fuels. Decision-makers from Imperial Oil, an Exxon subsidiary, acknowledged in 1967 that the petroleum industry was a “major contributor to many of the key forms of pollution”.

In a major finding last month, US and UK researchers concluded that “nearly one in five of all deaths worldwide each year are due to particulate pollution.” This number is greater than that caused by HIV/Aids, malaria, and tuberculosis combined. About 350,000 of these deaths occur annually in American (Milman, 2021). While air pollution regulation has become more common, pockets of pollution remnants are often concentrated in poorer communities, which further exacerbates the disproportionate effect of climate change on more vulnerable populations.

Since the 1990’s the Environmental Protection Agency has stepped in and set limits to harmful emissions. An example of this is the pollutants limits set forth for the smallest of particles, known as PM 2.5, because they measure less than 2.5 micrometers in length. After this regulation was established in 1997, companies such as Exxon pushed for personal studies that alleviated them of responsibility relating to air pollution. When statements such as this are made public, air pollution science is greatly undermined and alternative harmful companies, such as tobacco companies are prompted to “muddy the connection” between harmful emissions and severe health implications.

In lecture, we discussed sustainable development or meeting the needs of the present without compromising the ability of future generations to meet their own needs. This type of development requires protecting the environment and conserving the Earth’s finite resources. The actions of oil companies depicted in Milman’s article do not align with sustainable development, thus the question must be asked: What will be the role of oil and gas companies in 10-15 years?

Discussion: Do you think these companies (American Petroleum Institute, Exxon, Imperial Oil, Shell, Esso) were acting as ethical corporate citizens? Why/ why not? If not, how will this impact their responsibilities in the future? 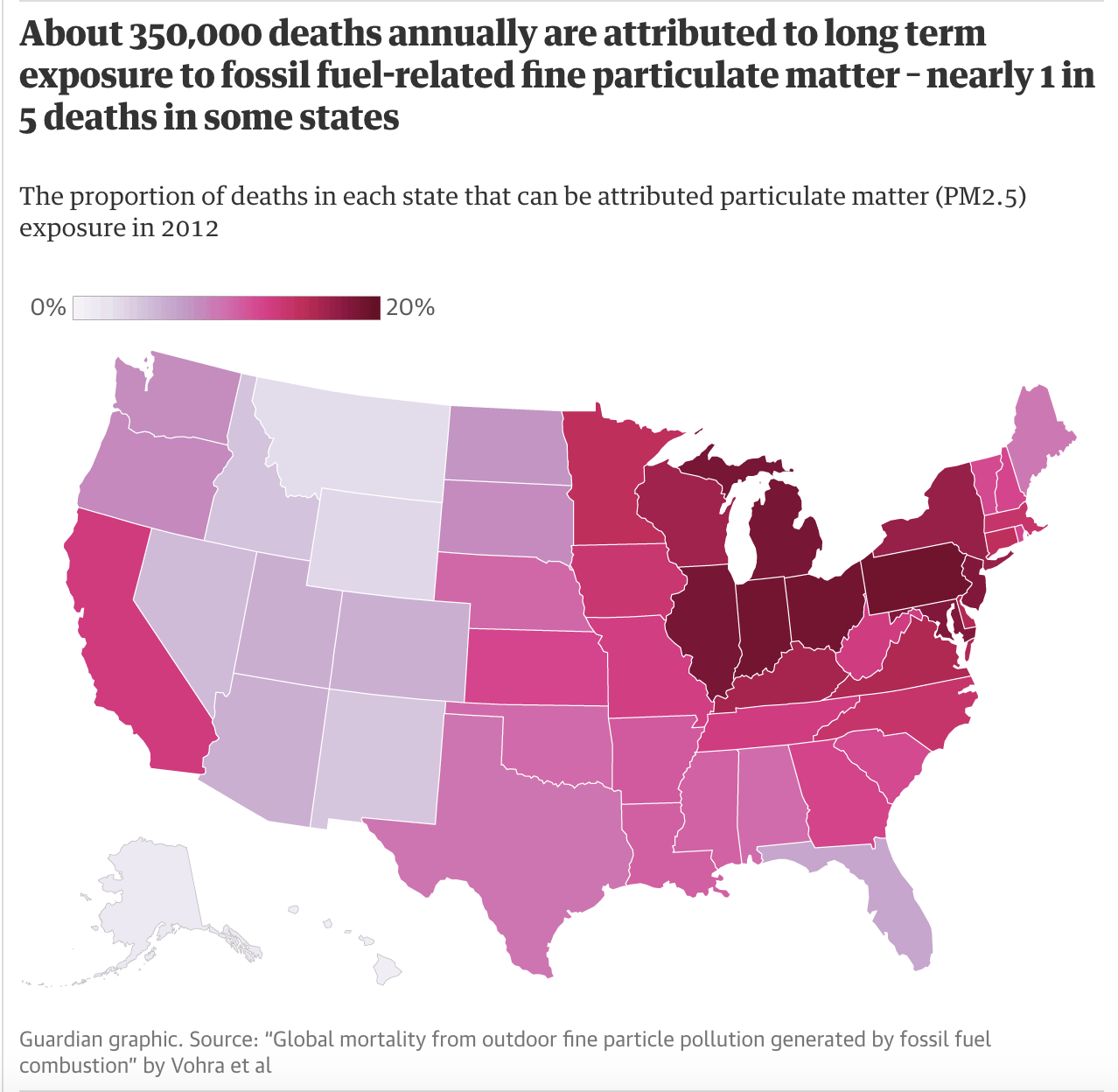 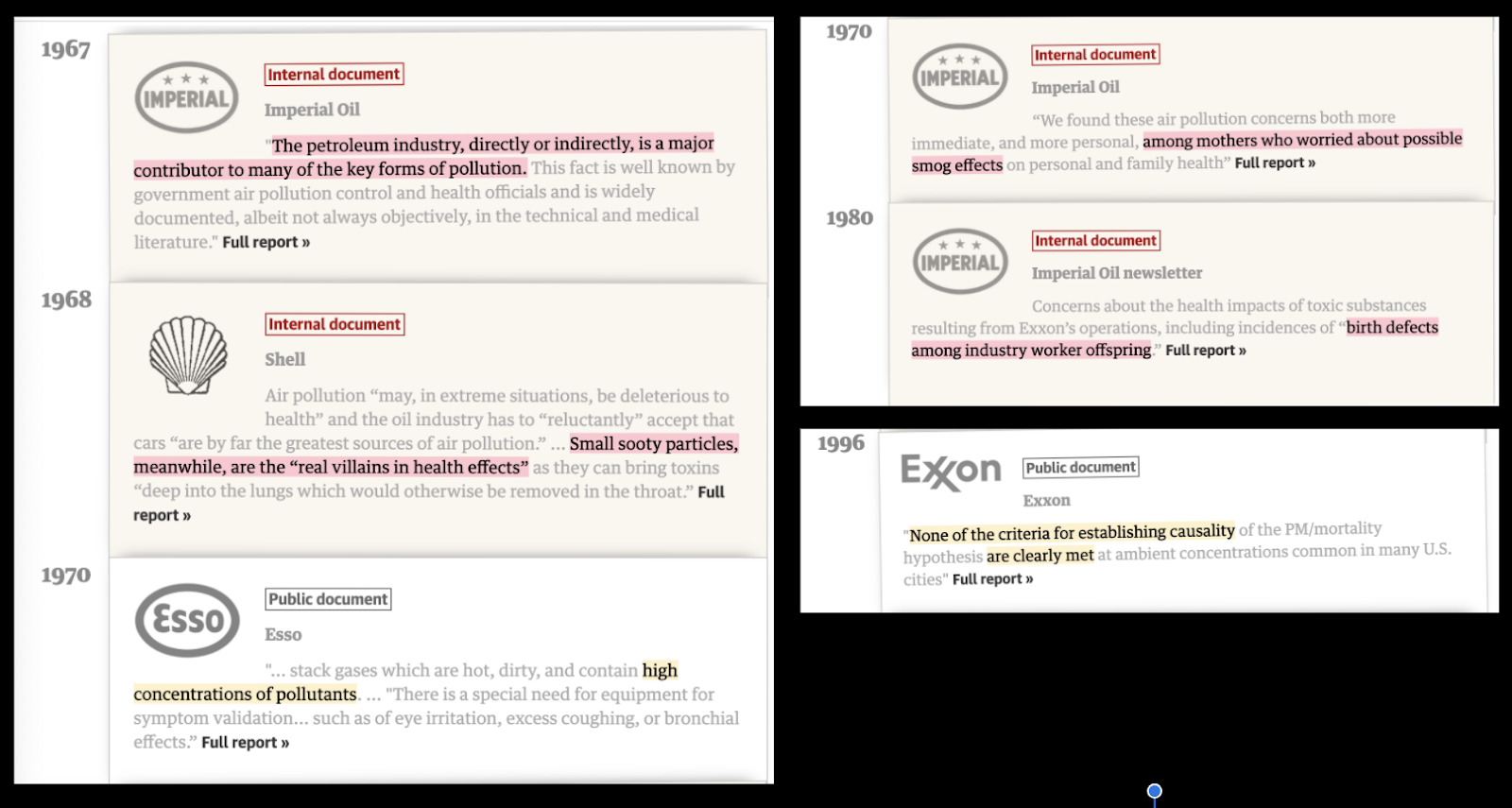