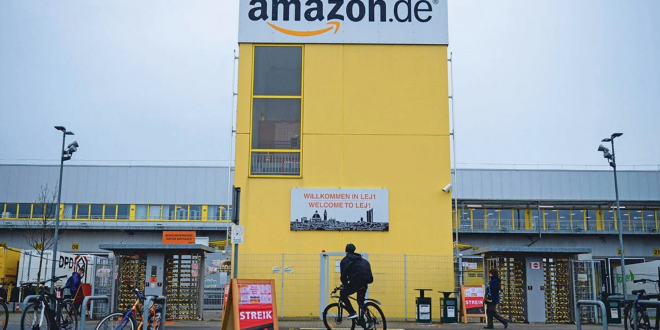 smroberts01 November 11, 2021 Readers Forum Comments Off on Strikes are Being Led by A German Union to Increase Amazon Worker’s Wages 401 Views

The following post, written by Saraya Roberts, is in response to an article titled “A big German union fights to preserve national pay standards” in The Economist, which was written on November 6th, 2021:

Currently, Amazon workers in Germany make the equivalent of around $35 thousand dollars per year. This is considered low-income in both the U.S. and in Germany, and if you have a family to support, you will most likely struggle to make payments for various expenses.

In the image above, you can see an Amazon fulfillment center in Germany, which is one of the warehouses where packages are prepared for delivery worldwide.

Around 2,500 Amazon employees at seven different centers in Germany walked out a few days ago on November 2nd.

This is the 8th year that a worker’s union in Germany has held a strike like this against Amazon worker’s wages.

They are demanding an immediate salary increase of 3% this year, followed by 1.7% next year, because Amazon is making lots of money in Germany, and the union believes they should not continue to refuse wage increases that other companies in the sector currently pay.

This article relates back to our last class discussion on stakeholder activism. This event is worthy of discussion because it shows how stakeholders in a company, (here it is the employees) have the ability to be activists and to take matters into their own hands and strike for better wages in order to pressure companies like Amazon.

One of the strikers from this event said that he would not give up, because Union pressure on Amazon has worked to increase wages in the past.

However, there are many employees who refuse to strike because they believe that Amazon is actually a good employer because they pay their employees $14 per hour instead of the minimum wage which is $11 per hour (They get paid in euros, but this is the conversion amount).

So, who’s job is it to fix this issue?

I think that Amazon will eventually be pressured to raise their minimum wages if more and more workers begin to strike and if other companies raise their own worker’s wages. Amazon will have to give in the this example of stakeholder activism.

But, what do you think?

Previous Carbon Capture is Here: Should we be Worried?
Next Amazon Staten Island Workers Withdraw Request for Union Vote

Board meeting best practices can make your appointments more prosperous and help you reach your ...