The Business of Correctional Facilities

makiese November 4, 2015 Readers Forum Comments Off on The Business of Correctional Facilities 1,545 Views 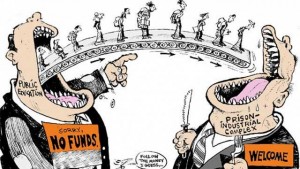 Recently there has been a boom in the in the number of private correctional facilities. This is mostly due the facts that in the late 1960’s, the US began to expand the powers of law enforcement agencies around the country, generating by the 1970’s an unprecedented reliance on incarceration to treat its social, political, economic and mental health problems. The US has one of the highest incarcerated population figures at 716 per 100,000. This unprecedented growth meant that the US Prison system could not cope with the prison boom. Building new prisons is a slow process that requires consensus from governing bodies and the local communities. However, the issues of overcrowding and increasing expense to run state prisons opened a business opportunity for the private sector.

A private correctional facility works by charging the government a fixed per day or per prisoner fee. For example $50 per prison or per bed a day. Although there was much debate around privatizing prisons, the notion that private facilities could operate higher quality at a lower cost to the taxpayer, was one of the main reason, which silenced the critics. Today, “nearly ten percent of US prisons and jails have been privatized,” the three largest firms being CCA, WACKENHUTCORRECTIONS CORPORATION and CORNELL CORRECTIONS, INC. The private sector has extensive political influence, and connections especially through lobbying and campaign contributions. They have come to censure the government for having a monopoly on the corrections business, as well as too much bureaucracy. Moreover, most private correctional corporations claim that they are more efficient in business operations and save taxpayer’s money.

As private correctional facilities demand for more autonomy there are several issues that must be confronted. First, the private model is centered on profits; it operates services within the prison. For example, medical care, security and food, in order to make the most profit. The fact that the correctional facilities are profit orientated means that in the times of difficulty, essential service may be overlooked. Secondly, we must question the accountability of private prisons. There is very little data conducted on private institutions and its inmates; some states allow privatization without requiring cost and quality evaluations at all. Insightful comparisons between private and public institutions needs to be conducted in order to fully evaluate if this system is truly as cost-effective and accommodating as it claims or to see if we are spending taxpayer’s money to further endanger inmates.

Previous “When Women Get Stuck, Corporate America Gets Stuck” – Sheryl Sandberg
Next Walmart Pledges to Use 100% Green Energy by 2020