The Environmental Cost of Fast Fashion

Clothing companies are increasingly designing their manufacturing processes to cater to consumers’ growing tastes for fast, fashionable and cheap apparel. Brands such as Zara and H&M have triumphed in this fast fashion industry in which the design and manufacturing process for clothing can take less than one week. Fast fashion provides bargain prices for trendy clothing designed to last for a short period of time—in fact, today women on average wear a garment only seven times before getting rid of it. 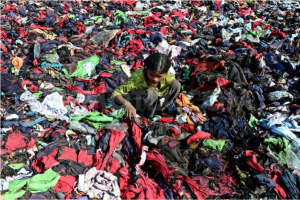 However, this article by the Australian Broadcasting Corporation (ABC) highlights the environmental consequences of this fast fashion trend. The article cites how rivers and waterways are being contaminated as a result of the constant manufacturing and disposal of clothing. Millions of clothing items are being disposed of annually, and only a small percentage of those items are being resold or donated—the rest are sent to landfills. Many of the materials used to make these clothing are not designed to be disposed of in landfills. The article gives the example of wool, which leaks a type of ammonia when disposed of in a landfill.

This waste is polluting rivers and waterways around the world. The article explains how in parts of China and India, some farmers can actually predict the season just by looking at the colors of the rivers which are being polluted by the textile industry. In Australia alone, over 500,000 tons of textile waste end up in landfills each year.

While the article talks about the environmental consequences of fast fashion, it also expresses some feelings of hope. The article goes on to explain how industry-led initiatives are working to minimize environmental waste in the textiles industry, as designers and manufacturers are increasingly being pressured to change their processes. For example, many brands are putting pressure on suppliers in China to embrace a “zero-discharge initiative” to stop the emission of hazardous chemical waste in water.

I believe that as consumers become more aware of the environmental and social impacts of fast fashion, some will try to seek alternative, eco-friendly brands. However, I also believe it is difficult to end this culture that is obsessed with fast fashion, as consumers already have an appetite for affordable garments with short lifetimes. Therefore, I believe a certain level of government regulation is the only way to truly reshape the garment industry to benefit the environment and society as a whole.