The Trans-Pacific Partnership: A pact leading to economic gains or failure?

CodyMeagher March 27, 2016 Globalization Comments Off on The Trans-Pacific Partnership: A pact leading to economic gains or failure? 2,030 Views

The Trans-Pacific Partnership Pact (TPP) was made official on February 3. The Partnership is one of the biggest trade deals in history and the countries involved account for a large part of global economic output and world trade. The countries are Australia, Brunei, Canada, Chile, Japan, Malaysia, Mexico, New Zealand, Peru, Singapore, the United States and Vietnam.

The goals of the deal are to eliminate tariff and non-tariff barriers that hurt trade and investment between the member countries. Why would these countries want to do this? There will certainly be winners and losers but it’s simple economics, free trade increases economic gains as a whole. Free trade cuts down on deadweight losses and increases consumer surplus. 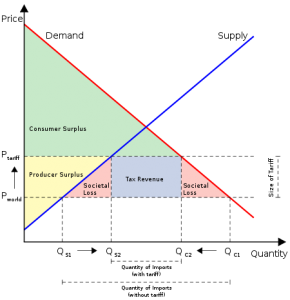 Critics of the deal argue that it will make people lose their jobs. The argument being made is that if you buy foreign goods you are destroying domestic jobs. But this is false. There isn’t job loss but a job shift. More trade will destroy import-competing jobs. But it will also create jobs in export industries. So, while it is true that import industries will suffer it is also true that export industries will thrive, there will be lower prices, and the quality of goods and services will increase due to foreign competition. The positive far outweighs the good. Calculations by Gary Hufbauer say that for every displaced worker there will be a national gain of $400,000 annually. (Domínguez, 2016)

Another goal of the partnership is to implement common rules for foreign investments, intellectual property, labor, and environmental standards. By implementing the standards within the partnership and not individually it will streamline regulations between the countries. An example of a standard set is each member country is required to have a minimum wage, set working hours, and safety regulations. This is a great goal to set as it now only raises the standards in the partnership countries but will also force any other country that wants to join to improve their standards.

Critics do have some good points though. A good percentage of the gains in income will go towards workers already making $88,000 a year in the U.S. (Amadeo, 2016). This is because, especially in high wage countries, free trade contributes to income inequality by encouraging cheap goods to be imported from low wage countries.

Different countries will receive different economic gains from the Partnership. Countries that already had free trade will benefit less. But countries like Japan and Vietnam who had more protected economies before the deal will benefit immensely.

Many people speculate why China was not included in the deal. Simply put China is not ready to meet the standards of free trade and investment that are required to join the partnership. It is thought that sometime in the future when China cleans up some of its standards and regulations it would make a lot of sense for them to join the partnership.

I feel that the Trans-Pacific Partnership is a good deal. It will increase economic gains for all countries involved through lower prices, higher pay in export jobs, better quality of goods and services, and greater foreign competition. It will also improve labor, trade, investment, and environmental standards for all countries involved and for countries that will want to join the partnership one day. The deal will impact low-wage workers and import-industry workers but the net gain is positive.